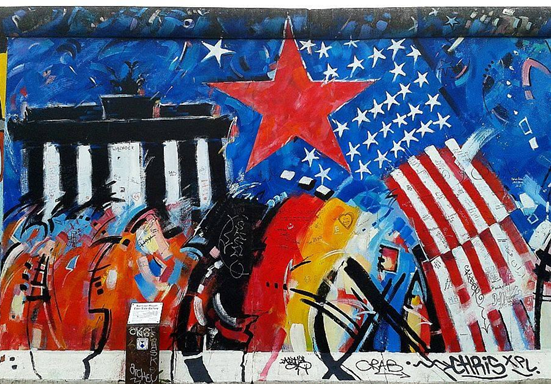 Please submit your abstracts or podcast/vodcast/portfolio proposal* by 1 June 2019.

The tumultuous year of 1989 has led to dramatic shifts in international relations: with the end of the Cold War the bi-polar international order has changed, creating a new security landscape. The crumbling economies of the Communist world gave way to capitalism, which itself had been changing. Totalitarian and authoritarian regimes began democratising. The Iron Curtain and the Berlin Wall came down. Europe reunited. “History ended”. Or so it seemed.

On the 30th anniversary, it is time to reflect on the hopes and desires of 1989. While the 30 years after 1945 is remembered as the Trente Glorieuses (the Thirty Glorious Years) of uninterrupted economic development across much of Western Europe, the three decades since 1989 conjure up very different images in East Central Europe. Liberty was quickly attained, though some argue that 1989 remains an “unfinished revolution”. Democratic backsliding, observable across the region to a varying degree, appears to be a case in point. Russia’s growing influence and “return to the region” has brought back the existential fear in some countries, and raised the prospect of a new Cold War with a new Iron Curtain at the EU’s external borders.

Each country has had a different perspective on 1989: in some countries it was a popular revolution, velvet or bloody, in others it was an “unfinished revolution” of elite negotiations. Some countries gained their national independence, while others view it as the start of new dependencies. Have these differences influenced how 1989 is viewed 30 years later? This conference is looking to explore what 1989 means for those who were born well after the Wall came down. How do they view the legacy of 1989 today? And what is its legacy? How have the diverse experiences of that year shaped these countries’ thinking on security, their political, and economic developments, societies? How has this legacy influenced the new world order after the collapse of the bi-polar system?

We welcome students to submit papers/podcasts/vodcasts/photo portfolios relevant to any of the above questions from either side of the Wall. We particularly encourage submissions in the following broader topics:

Please submit your abstracts or podcast/vodcast/portfolio proposal* to this form by 1 June 2019. Submissions should be between 250-300 words. Final papers are expected to be 3-4,000 words.

Each conference participant will receive feedback on their contribution, and a certificate of participation. The best papers and contributions will be published on our website.

The conference is open to BA/BSc students of international relations, political science, or any related fields (e.g. sociology, economics, etc.), who will have completed their first year at university by the time of the conference.
The conference fee is €75 which covers accommodation for two nights in the CEU Residence Centre, meals, social events, 72-hour public transport in Budapest, and free Wi-Fi.
Students who do not require accommodation should indicate this on the form. The reduced fee for those who do not need accommodation and a Budapest travel card is €45.

*Please be aware that if you intend to submit a podcast/vodcast/portfolio, you will also be expected to submit a 1,000 word paper to supplement your submission.